Today Hannah had her second round of botax injections, just about 4 months from the first one we did in February. She had 6 injections again in pretty much the same places, with a little more focus on her left calf as she has been doing a lot of intoeing with that left foot. B took her this time which was a mixed blessing. On the one hand, I really hated to send her off without being there with her. On the other hand, it was so hard last time to watch them give her the shots and see her have to deal with that pain so I was glad to be removed from that. B's report was that she did great, just like last time: cried hard while she was being injected, but then was totally fine. Thankfully the whole procedure takes less than 5 minutes.

The physiatrist told B that he reviewed the hip xrays Hannah had done a few weeks ago and said that her left hip is starting to slide out of the socket. This is probably a result of her tight hamstrings and he seemed to indicate that while it wasn't extreme, he wanted to keep an eye on it and hopefully could manage it with more focused botax in that area. I'm bummed because I feel like she's doing so phenomenally in her developmental gains and yet despite that, there are these structural issues that are still unavoidable. Kind of like her left foot dragging. These things don't seem to hold her back from making amazing progress but they are there and need to be dealt with.

Lately I have not been as vigilant about this stuff because she is doing so well, and because I'm starting to become more inwardly focused as I get ready for the baby. Then I feel guilty that I'm slacking off on Hannah's treatment and need to be more on top of what we're doing for her. Sometimes I just want to not worry about it and let her be a kid. And then I hear news like this today and think, "we weren't stretching enough, getting her out of the W-sit more often, working those hamstrings enough..."

The girls really like to tell stories while I videotape them, and then watch themselves after. Here's a chat Isabelle and I had recently. 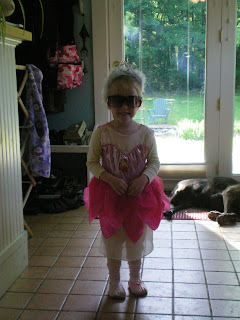 I came down to breakfast this morning (it was my turn to sleep in!) and this is what Isabelle was wearing. I love it!
Posted by CP and Me at 8:21 PM No comments:

Today Isabelle asked at dinner why we decided to have another baby. B gave a really nice answer, along the lines of how wonderful she and Hannah are and that they would make great big sisters so we thought it would be fun to have another. Then Isabelle turned to me and asked, "Why did you decide to have another baby with Daddy? Why didn't you go outside and find someone else to have one with?" I guess she thinks I need to get me a new baby Daddy!
Posted by CP and Me at 10:16 PM 1 comment:

About a month ago, I posted a gripe about the fact that Hannah was still so limited in her mobility, even though she was getting around great in her walker. The transitions to/from her walker and from her walker to other places were not happening so she still needed a lot of assistance.

I guess I should post gripes more often because maybe the message goes out to the CP mobility gods and they snap into action, since now I can say that Ms Hannah's mobility has just taken off in the past few weeks. I'm thrilled!

First of all, she is pulling up to and at everything which is huge. She pulls up in her toddler bed (a safety concern but exciting nonetheless), she crawls to and pulls up into her walker, she crawls around the playroom and pulls up to the play table, and so on. It's so great! If she's doing something on the floor I can put her walker near here and leave the room and if she decides she wants to go somewhere else, she can. Her steering and control of the walker have taken off as well. She can get just about anywhere she wants on the first floor of our house, so her need to ask for help to access her toys is greatly reduced.

This is so wonderful to see and also very good timing because the girls will be enrolled in a pre-preschool program in July and then regular preschool in September, so knowing that Hannah is that much more able to get around her environment is very comforting to us.

It's hard to know how much of this is a developmental leap that would have happened anyway and how much is attributed to the botax, which we're going to do another round of in a few weeks. Some of the tightening is coming back in Hannah's hamstrings and adductors but overall she is still doing really well. Her doc feels like we should just keep going with the botax treatments while she's making these developmental strides so that she has every advantage she can to learn these new skills while her tone is reduced. The only place where her tone seems to be having a more dramatic affect which the botax didn't seem to relieve much is the turning in and dragging of her left leg, so this go-around she'll get 2 additional shots around her calf muscles to try to help with that. But I guess this is a muscle group we need to keep an eye on to see if she might require some kind of orthopedic surgery down the line.

We also got a hold of some teeny tiny forearm crutches for Hannah to try, which just happened to come in hot pink so that pretty much sealed the deal for her in terms of her willingness to give them a whirl. This will probably be pretty slow going, though: she's super motivated but I think is still a way from feeling comfortable bearing her weight on them. In addition, with my added bulk I don't feel like I can do all of the bending over that would be required to really practice diligently with her. Hopefully Daddy can do some of it and we'll just take it slowly right now. But it's exciting to think that maybe in the next year or so, hopefully before kindergarten, she will be using them instead of her big bulky walker.

So as always, our girl is on the move and keeping us on her toes!
Posted by CP and Me at 7:51 PM 2 comments: 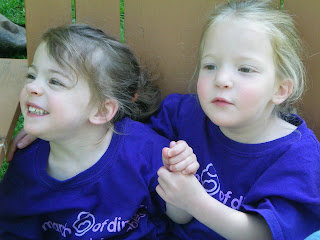 A few weeks late, but I'm checking in to report on the great success of our walk for the March of Dimes: we raised close to $1300 and are so grateful for those who contributed in some way even given the tenuous state of the economy. It's such an important cause, one very close to our heart, and we were buoyed by all of your support and love.

The weather was much better this year than in years past: a little chilly at the start but it warmed up quickly and helped keep us cool throughout the 4 miles. We had the baby jogger with us but both girls were eager to get out and walk so with Hannah in her walker, Isabelle in her meandering preschool stroll and me in my 24-week waddle, we were not breaking any land speed records. In fact, we finished dead last! But we had a great time and I think the girls were more tuned in this year to the meaning behind the walk, which was pretty cool. At one point, Isabelle said something about giving money to the doctors so they could help babies like her and Hannah. So true, so true.

I want to continue this family tradition in years to come as it has become a mainstay on our spring calendar and an important opportunity to stop and reflect on where we've been and where we are now, something I really value and which helps my own healing around the trauma of the girls' birth. And next year, we'll have a new little friend to join us!!!
Posted by CP and Me at 7:31 PM 1 comment: