Sponsor Me at March for Babies!

In just two more days, our family will be walking for the 4th year in a row to raise money and awareness for the March of Dimes, as well as take time to honor and celebrate our own journey through prematurity with our amazing Hannah and Isabelle.

Have you donated yet? We are still a bit shy of our fundraising goal and every dollar counts. If not, please consider doing so by clicking here. Thank you, and we'll be sure to post pics after the weekend!
Posted by CP and Me at 7:44 PM 2 comments:

Hannah and Isabelle were born at 27 weeks, just 5 weeks from where I am now in this pregnancy. As the time gets closer, I find myself getting more anxious about every little cramp and twinge, wondering if it's going to happen again.

My OB assures me that carrying a singleton is an entirely different kettle of fish than being pregnant with twins, and she reminds me that this pregnancy has been, thus far, totally complication-free unlike my pregnancy with the girls (I had a subchorionic hematoma that led to a bad bleed at 8 weeks and continued bleeding and spotting through around 16 weeks or so). She says that while there are no guarantees, she feels pretty confident that I will go to full or near term.

It's hard for me to imagine what that would be like. To wake up one day and say, "I think this is it: I'm going into labor!" and have it be a moment of excitement instead of dread. To have a birth that is joyous and welcome as opposed to traumatic and fraught with fear. To go home a few days later with a warm bundle of baby in my arms instead of an empty and aching heart.

I'm crossing my fingers and toes that things will just keep chugging along and suddenly I'll be 40 weeks and more than ready to meet this new little one. In the meantime, keep cooking little bean! It's not time to come out just yet.
Posted by CP and Me at 7:36 PM No comments: 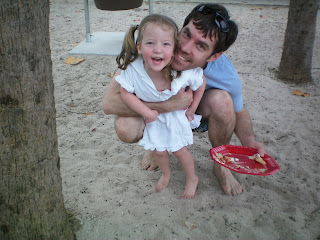 It's been awhile since I've done a post about our girl Isabelle. I want to be sure not to neglect her as she is definitely Miss Personality and doing all kinds of growing/learning/changing right along with her sister Hannah.

Isabelle is a funny, quirky kid. One of her quirkier routines is this hording and stuffing/piling kind of thing that she does. She will put a doll in the toy shopping cart and then proceed to pile every piece of play food, all of the items from her toy dinnerware set, other stuffed animals, blankets and baby clothes in, around and on top of the doll. Along those same lines, one day after her nap I found that she'd emptied out all of the bins that hold her toys and stacked them at the end of her bed in 3 rows (see photos below). Another night when the girls were trying to go to sleep, I went up to check on them and Isabelle had piled 5 or 6 blankets on top of Hannah. It's the most curious thing. I don't know where she gets it from and what it means. It's like she's a holdover from the Depression-era mentality of stockpiling all of your goods and food items.

Isabelle seems to have hit a big growth spurt recently and is now a good deal taller than Hannah at least 3 or 4 inches, I'd say. I wonder if I might actually have birthed a child that will be of average height (I'm 5'0" on a good day).

She continues to be the consummate caretaker/nurturer which Hannah plays to the hilt, constantly asking Isabelle to do things for her. I have to remind both of them that it's important to try to do things on your own first and then ask for help after you've given it a good effort. I'm a little worried about the mothering that will go on once the new baby arrives-poor kid!

Isabelle is definitely a rules-oriented, conscientious kid, often making sure I put on my seat belt and pointing out when other kids are doing something that we've told her is not safe. She's big into drawing these days and can pretty well draw inside the lines as well as draw a few letters (B, D, E, I, H). She is a great storyteller and has a really vivid imagination as well as a scarily good memory-today she was recalling a picnic we went to last summer where some other kids were playing croquet. It was the first time she'd met these kids, she hasn't seen them since, and she remembered all of their names. Her memory is better than mine!

I'm so excited to see Isabelle does with preschool next year as she's definitely ready for it and excited about it, albeit a little bit nervous as well. It's been so fun watching Belle change and develop into this little person. Sometimes I get so focused on what Hannah is doing and her motor accomplishments that I don't stop to take the time to acknowledge all of Isabelle's progress as well. But she is rocking and rolling along with the best of them!
\ 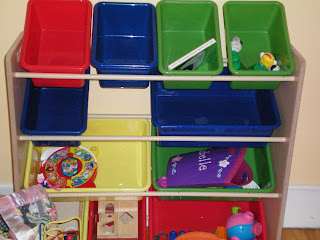 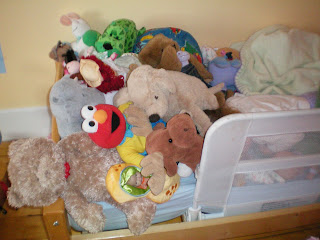 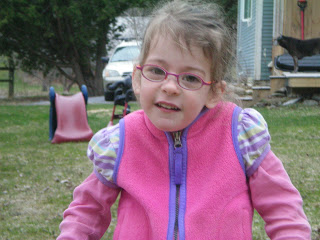 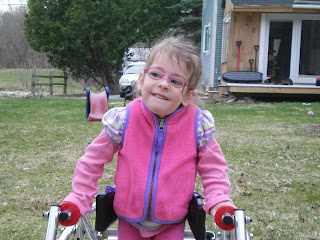 Hannah finally got her glasses. I have to say, she looks pretty damn cute in them. Now we just have to get her to keep them on!
Posted by CP and Me at 7:41 PM 6 comments:

I want this so badly for Hannah. All day long, I watch her struggle to get what she wants and to where she wants. She always needs to rely on someone else to help her. Part of me is eager for her to have this independence for selfish reasons: it's hard for Hannah to play on her own for long periods of time because if she decides she wants a different toy, or would like to move to a different spot, she can't.

We've tried to structure the playroom so that it's easy to cruise from one piece of furniture to another and it's somewhat easy for Hannah to navigate her walker through the space, but it's a lot easier for her to ask for help, which she does regularly.

I don't think Hannah is overly frustrated that this is her situation; it's her reality and she deals with it. But when I see Isabelle zooming around from one activity to the next, my heart squeezes and I feel a wave of sadness and frustration of my own. If only Hannah could do that as well.

It's compounded by the fact that in general, Hannah needs more direction and is less able to play for long periods on her own. She's always been like that; even as an infant she was more needy and fussy, whereas Isabelle was like the buddha baby and would just chill out in her bouncy chair or on a rug on the floor, content to check everything out on her own. I'm sure some of this is just a difference in personality and temperament, although I wonder if it would be made easier if Hannah could control her own environment more. I also wonder how much Hannah's brain injury and resulting CP contributes to this.

Miss H has come so far on the mobility front and yet some days it feels like she has so much farther to go...
Posted by CP and Me at 7:28 PM 2 comments:

Fun in the sun!

As you can see from the pics, we had a great time in Florida last week! Also, check out the super cool playground in the first few pics; it included a ramp-accessible castle in which Hannah wheeled herself all around. It's so nice to encounter such accessible spaces! 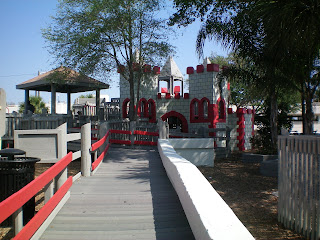 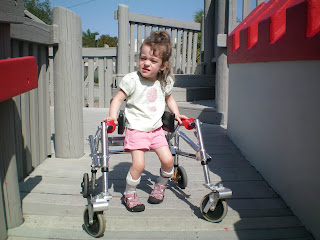 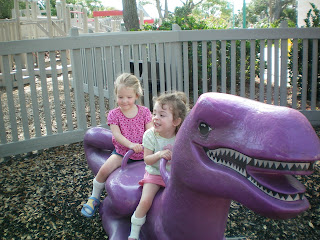 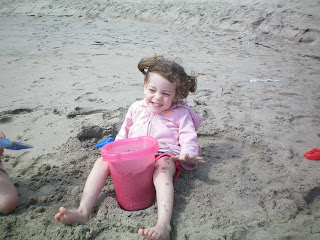 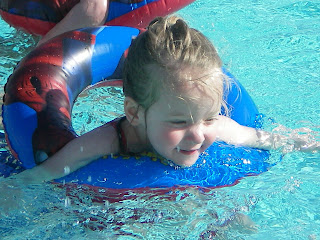 The girls and I have been on the road for the past two weeks, hence the reason why I haven't posted in awhile. I'll add pictures of our adventures soon, but for now here's a quick update:

We just got back from spending some time at my parents' and also joining them for one week in Florida. It was amazing to be in the warm sun, swim every day, walk around barefoot and see the ocean. We also got to see a lot of the family on my mom's side, who we don't see enough of. Daddy joined us for the last 4 days of our trip which was really great, especially since we haven't had a family get-away for a long time.

The girls did great on the airplane; they'd been on one before, but they were only 9 months old at the time so this was like a brand new experience for them. Hannah was a little nervous about take-off and landing (so was I!) but Isabelle loved evey single minute of it. The air travel schlep was a little rough: we opted for taking their carseats on the plane so we had a walker, a stroller, two car seats and a variety of carry-ons to manage. But everything worked out well and it was worth the schlep to be in the summery weather after the long winter we've had!

It was really amazing to see how far both girls have come in their swimming abilities. They were like little fish in the pool and the ocean, not afraid at all and trying hard to paddle and float. It was especially gratifying to see the effects of botax combined with the warmth and all of the physical activity Hannah got. She walked a ton, stood independently for 5 whole seconds, did a lot of transitioning into/out of her walker, off the couch, etc. She was all about being on the move and I think it just felt good to her to be able to get around with such ease. I hope we can keep the momentum going as we get back to the cooler weather here at home.

Overall, it was a great trip and I feel recharged and ready for the arrival of spring.
Posted by CP and Me at 8:43 PM 1 comment: