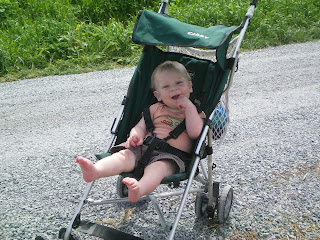 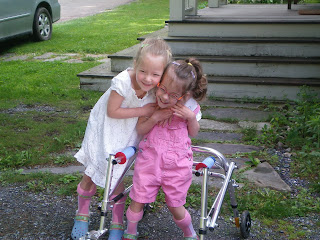 I'm long overdue on a post. Ever since school ended for the girls and the summer travel season kicked off, things have been super busy around here! Sam as you can see in the top photo is growing like a weed. He's only about 3 1/2 lbs lighter than Hannah at this point: he's a big guy! He's also a very happy, smiley guy who is now commando crawling all over the place, pulling up, saying "Uh, oh" and "Dada" and "Mama". He eats anything and everything and has an appetite that rivals the girls at their hungriest. We're having a lot of fun with him although now we're back in baby proofing mode which is a little tricky when you have older kids with tons of small chokable items everywhere. But anyway, that's a bit about Sam.

The picture of the girls was taken just before they left for one week at Grammie and Papa's house. This was the longest I've ever been away from them. I had a conference for work so my parents, who are amazing grandparents, drove all the way up to get them and take them back home for a week. Everyone had a great time and the girls did really well being away from us. I think my parents needed a spa vacation after but otherwise all was well! I definitely had a hard time saying goodbye to them; they've become such big girls, but seeing them drive off that morning, I felt like my babies were leaving.

But big girls they are, in so many ways. It really became evident how much they've changed and grown when we had their end-of-year school conference. First of all, I absolutely love their teacher and feel so grateful that the girls have had her to help shepherd them through their first school experience. It was really hard for us to contemplate the school process: where to send them, what to expect, how would they (and especially Hannah) make out. All of my fears were unfounded and in fact, my expectations totally exceeded. It's so clear that the girls felt safe, secure, comfortable and also challenged, engaged and encouraged to learn and grow at school.

And then there was the added bonus of the many physical changes and improvements they EACH made. Our former PT had told us that we would see great strides once Hannah went to school because peer motivation can be so strong. She was right on the money. Looking at the IEP goals written last winter, Hannah met almost all of them and even exceeded expectations in some areas. Some of the changes we've seen at school and at home:

-Hannah can now get on/off the potty, wash her own hands, get on/off a chair, climb up one of the stand alone slides on the playground, get across the playground grass, pea stone and even snow in her walker, eat her snack in a reasonable amount of time and then keep up with her peers on the long walk down the hallway to the door for recess, draw a picture of a person with recognizable features and other details, put on most of her clothing with minimal assistance, take off most of her clothes with minimal assistance, brush her own teeth...the list goes on and on. It's really been incredible to see how she has progressed over the past year. Of course, having the right set up in the classroom bathroom, at the sink, at the play tables...this has all given her so much more independence than she would have otherwise and we've been working hard to create these same adaptations at home as well.

And Isabelle has changed and grown in so many ways as well. She was really pushed, I think, by her able-bodied peers to catch up in some of the gross motor skills she was lagging in, as her play with Hannah didn't expose her to that. She wears orthotics because she's a toe-walker and she has always been a bit clumsy. Heading to school, she wasn't able to jump with both feet off the ground, she fell a lot when walking and had kind of an immature gait when running, she wasn't very confident climbing on playground structures, etc. She was also kind of shy and quiet and of the two girls, she was the one who cried for a few days at the start of school, not wanting me to leave her.

The changes we've seen in Isabelle:

-She can now climb, jump and run with the best of them
-She is completely independent with things like going to the bathroom, getting dressed/undressed, brushing teeth.
-She has become very social and when I would pick them up at school toward the end of the year, I often found Isabelle yelling to friends to "come play with me!" She made friends other than Hannah and separating from me got much easier.
-She is also able to write all of the letters of the alphabet, can sight read some words, and creates very elaborate and detailed drawings.

I'm so proud of all my girls have accomplished this past year, and I'm really enjoying this new phase of parenting as I watch these changes from a little more distance than when they were home with me all of the time. Now in fact, we're at the stage where being home all the time is not a good thing at all! They need to be kept busy with lots of activities. Hannah asks me every morning, "Where are we going today?" Let no moss grow under their feet!

The challenge for me this summer is to figure out how to meet their needs while also keeping Sam on his schedule. I also need to figure out how to navigate different places with the 3 of them, given both Hannah and Sam's mobility limitations. I did manage to take them all strawberry picking which I was pretty proud of. But there are a lot of outings that would just be too hard for me right now. I remember this phase with the girls, which seemed so long, where I did not venture that far with them on my own because Hannah couldn't sit well in many places and not all places were easy with a double stroller and they were still on a nap schedule. Then we got to that sweet spot where I felt like I could go almost anywhere with the two of them which was so liberating. Now we're back to being a little more homebound because of the little guy. I know this phase will pass quickly but it's definitely my challenge for the summer!
Posted by CP and Me at 9:08 PM 2 comments: