Hannah and Isabelle are now the proud owners of their very first tricyles! Both of them came this week; Hannah's is an adaptive tryke from Ambucs.org, a very cool organization which provides these amazing wheels for kids who need a little extra help to get peddling.

With the help of Hannah's PT, Barb, we got them out on our road today, which is a really quiet dead-end road with a slight slope to it so it's perfect for letting them get the hang of it with the help of the hill to give them some momentum. Barb was really impressed with how quickly Hannah got herself moving with the hand pedals and that Isabelle could peddle with her feet so easily. Go girls go!

Below are a few pictures and a quick video of the momentus occasion. The whole time I was watching them, I just couldn't get over the fact that my girls are old enough now to be riding bikes. Where has the time gone?! 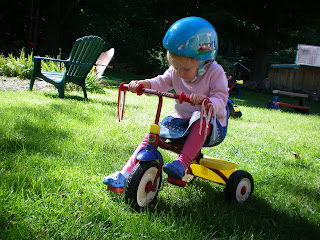 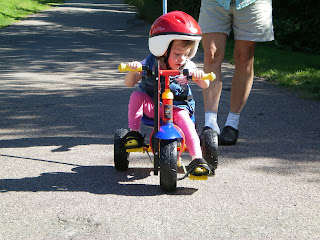 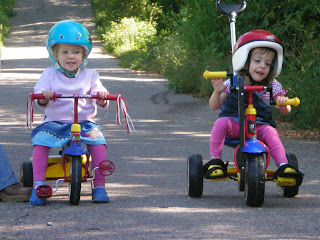 The other day I was watching Hannah make her way around the house with her walker and it really struck me, how much it must SUCK to have to drag this big metal thing around with her all day when all she wants to do is get quickly from point A to point B and keep up with her sister, have her hands free, and not keep crashing into the walls or getting stuck trying to go around corners. It made me really sad. I keep myself so focused on Hannah's progress with her walker (now she can lift the front wheels, now she can steer, soon she will be able to lift herself into and out of it safely...) that I don't allow myself to stop and look at exactly what it is that she's walking around in as she tries to go about her day like a typical almost-3 year old. I haven't looked that closely at her walker, in fact, since we got it. I've chosen instead to look past it, toward the potential it holds for Hannah in terms of independent mobility.

Ultimately that independence, in whatever form it takes, is what is most important for Hannah. She tells us regularly that this is what she wants. "I want to go on the potty. I want to climb into my chair myself. I want to walk around. I want to push the baby stroller...." and so on.

And I want this for her as well. I just with she could attain these goals without needing to lug her walker around with her. Grateful as we are that she has one and has figured out how to use it, it weighs her down and holds her back. And Hannah's spirit, well it's light as air and just wants to FLY. Maybe her next walker model after she grows out of this one will come with wings.
Posted by CP and Me at 10:56 PM No comments:

If you've ever had to give your kids prednisone (steroids) for croup/wheezing/asthma, then you know what I'm talking about. It's true...even in small doses this stuff is EVIL. Poor Hannah started wheezing on Sunday night, followed Monday morning by a bad cold and cough. We thought we had the wheezing under control with albuterol and flovent, the two inhalers we have around the house for just these occasions. But on Wednesday even after a breathing treatment she was still really tight in her chest and wheezing. Off to the pediatrician we went and he prescribed prednisone.

It's been awhile (probably about a year) since we've had to give this to them so I forgot or blocked out what the side effects are like. Well I'm here to tell you that they suck. First off, Hannah has had a really hard time settling down for naps and bedtime. It takes 4-5 tries with lots of screaming and crying and requests for milk, songs and stories before she finally crashes. She's also woken up from her naps thrashing around, hitting and scratching and crying like she is pissed like nobody's business. I figured out yesterday that if I danced around the room with her really fast while shushing her and patting her back, she would settle down after a few minutes. It was like going back to the colic days. Other fun side effects include Hannah's immediate frustration and anger when she doesn't get what she wants, her constant whining and crying, and her urge to quickly lash out and scratch, pull hair or hit anyone in her path when she's upset.

Sunday is the last day we have to give this to her and I CANNOT WAIT. I want my girl back.
Posted by CP and Me at 9:38 AM 2 comments:

Isabelle is all about stalling before bed. It's gotten pretty bad. A friend of mine said she's started bringing a timer into the room with her when she puts her son to bed and that seems to have put a stop to it. I think we're going to have to try that tomorrow. Here's an ABRIDGED version of what went down tonight (with each sentence, I attempted to walk toward the door to leave but then she started up again with another request which, if ignored, would cause her to scream and cry):

"Mommy fold my blanket. Mommy wipe my eyes. Mommy wipe them again, they're still wet. Mommy I want green and blue and red candles for my birthday. Get my blue egg, Mommy. I want it with me. Mommy tuck me in. I need to kiss and hug you again, Mommy. I have to do it again because I missed. Daddy tuck me in too."

I almost threw myself out the window. Seriously.
Posted by CP and Me at 10:24 PM 2 comments:

So we had a relatively healthy summer, all things considered. The girls have steadily built up their immune systems and are less prone to catching everything under the sun. But all that fun at the Ranch took its toll and Hannah was down for the count most of last week. Nothing major, just a virus that lingered. In general she tends to get hit harder and for a longer time when she gets sick, as compared to Isabelle. So now, a week from the onset, Hannah is still not herself.

She doesn't have a temperature anymore or any other noticeable symptoms, she's just very clingy and cranky, doesn't have much of an appetite, and has little desire to do much in the way of independent mobility.

It's SUCH a bummer after the progress she's been making; she's been on such an upward trajectory lately that to see her stall out again is kind of crushing. I have to remind myself that Hannah works SO MUCH HARDER to do the things that most kids her age take for granted: sit, stand, walk, kneel, pull up...so she definitely deserves a break sometimes. In some ways, it gives me new respect for her perseverance and determination. It would be so much easier for her to just sit back and let the world go by while someone else moves her body for her. But she keeps pushing herself to do these things and I guess it's inevitable that eventually, her body will take charge and say, "OK kid, let's just chill out for a bit."

So we're chilling out now and watching a lot of Thomas the Train and dealing with the constant rain in our neck of the woods and basically, we have the virus blues...
Posted by CP and Me at 9:56 PM No comments:

We've been busy around here; we had family in town and then we went with B's family to this great family resort in the Catskills of New York: Rocking Horse Ranch. It was chock-full of nonstop activity and the girls absolutely loved it. Pony rides, two outdoor and one indoor pool, bonfires, a lake with kayaks/paddleboats/waterskiing, horseback riding for the older kids and adults...TONS of good food...very friendly staff...and all 12 of the girls' cousins plus aunts, uncles and Grandma.

We're still recovering a bit: poor Hannah caught some kind of bug and is still not quite herself. But despite that, it was so nice to get away, hang out with the rest of the family and also enjoy the girls at this amazing age of discovery and fun. I know I'm biased, but they're both really cool kids to hang out with so having this time with them was really special. 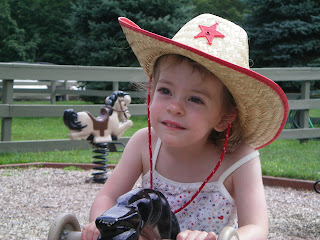 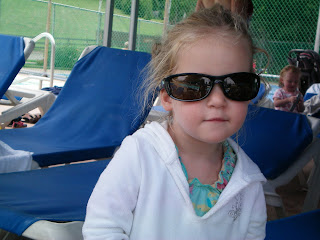 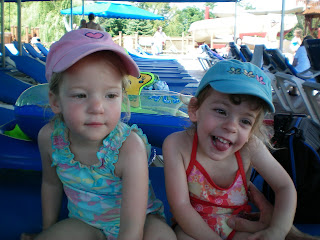 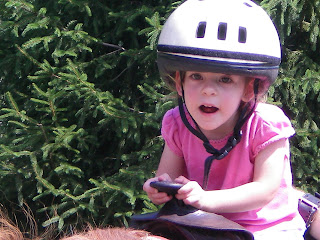 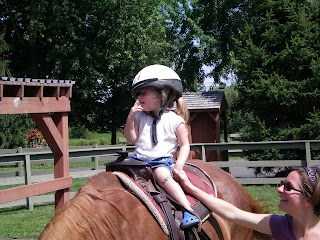 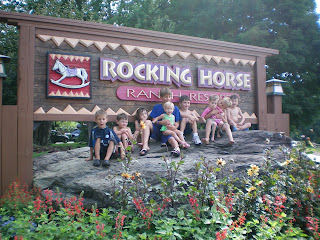 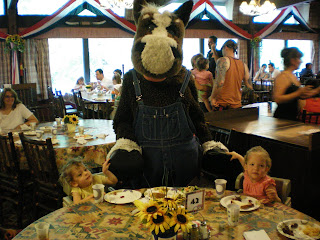